“No distinction as to sex in studies, examinations, or the giving of Diplomas.” Thus states the Annual of Milligan College for the 1880-1881 Session, when the Buffalo Male and Female Institute became Milligan College. Being a coeducational college was unusual for the time, but it was not surprising due to the college’s original status as a primary/secondary school as well as the influence and ideals of Josephus Hopwood, the first president of Milligan. A new exhibit in the Welshimer Library and online (in Milligan DigitalRepository) examines Milligan as a coeducational institution during the Hopwood era, from 1881-1917, from the beginning of Josephus Hopwood’s first term as college president to the end of his second term. 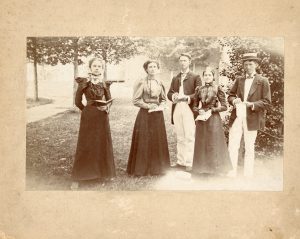 “I think we often forget that Milligan was unusual in educating men and women together during its early days,” says Katherine Banks, University Archivist. “I hope that this exhibit shines some light on why that was and what that meant for students at Milligan during those early years.”

Thanks to Milligan’s roots as a school run by the local church, Buffalo Creek Church (now Hopwood Memorial Christian Church), that then developed into the Buffalo Male and Female Institute, the ground was already set for the college to be coeducational – educating men and women side by side instead of separately (or sometimes not at all, in the case of women). Josephus Hopwood also brought a passion for coeducation when he became the college’s first president, in part because of his religious background and his own college experience. 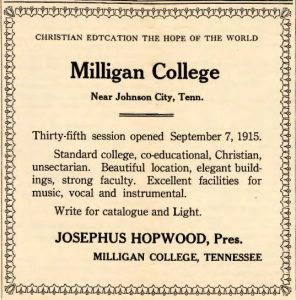 This ad from a 1915 edition of the Milligan paper The Light proudly lists being coeducational as one of the college’s merits.

“We have to remember, however, that educating men and women together didn’t mean they were always together all the time and had a completely equal experience,” Banks says. “The exhibit discusses some of the ways that they practiced equality by today’s standards, but also the ways in which they did not.” Women were subjected to more restrictive rules than the men, and some classes were specifically for women. But there were many classes that had both men and women in them, and even the faculty at Milligan was mixed to some degree. Overall, Milligan was making strides as a coeducational institution.

The exhibit “‘No Distinction’: Coeducation in Milligan’s Early Years, 1881-1917” is available to view in person on the first floor of the Welshimer Library for those currently allowed to visit campus under the Milligan Returns Home plan. The exhibit can also be viewed online with a more extensive discussion of coeducation at Milligan.