Project simulation is an effective skills learning strategy for engineering students. But sometimes the best learning experience is gained from a project where students have to work with an actual client and produce an actual product with real-world application. The latter describes a project recently completed for Milligan Libraries by students in Dr. Landon Holbrook’s Engineering Fundamentals (FENG 102) course. 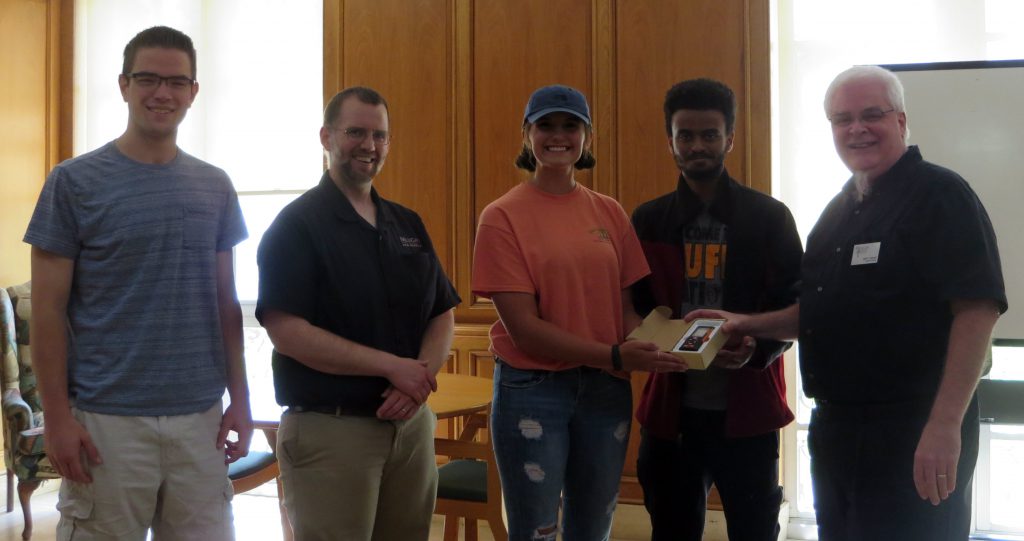 In Fall, Director of Libraries, Gary F. Daught approached Dr. Greg Harrell, Director of Engineering Programs, about the prospect of having Engineering students produce a set of revised floor plans of the P.H. Welshimer Memorial Library and the Seminary Library, located in the west wing of the B.D. Phillips Memorial Building on Emmanuel Hill. “Milligan College is preparing for its re-accreditation with The Commission on Colleges of the Southern Association of Colleges and Schools (SACSCOC),” explained Daught. “The Library has to submit a narrative describing its facilities, resources, staffing, and services as part of this process. Having up-to-date floor plans of the Library’s physical facilities would greatly aid my description. We had digitized copies of the original building blueprints. But they weren’t very clean or well labeled, and they didn’t show all current library spaces. I would definitely benefit from a new set of library floor plans to include in my SACSCOC narrative.”

Dr. Harrell put Daught in touch with Dr. Landon Holbrook, Assistant Professor of Mechanical Engineering, who teaches the first year Engineering Fundamentals (FENG 102) course. It turns out that in this course students learn about taking space measurements and mapping physical spaces using computer aided drawing programs like AutoCAD. Holbrook was pleased to put his students on this project as it would give them a real-world application for the skills they were learning. Students were divided into teams, with a project manager, and they were assigned various sections of the Library buildings to measure and then translate into complete drawings using AutoCAD. 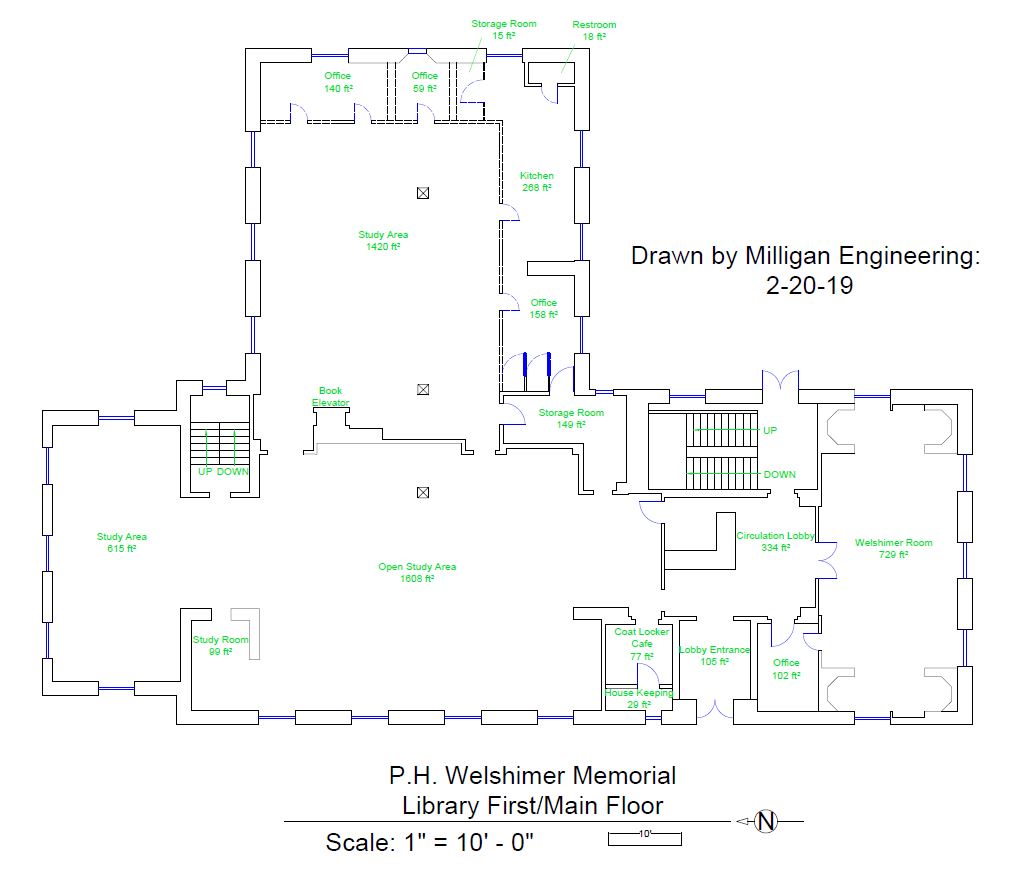 Project manager Erin Forgety spoke about the importance of teamwork and communication. Second project manager Yonas Sorri admitted that lots of mistakes were made. “Our first attempt was a disaster! But we learned by our failures.” Professor Landon confirmed that a whole lot of mistakes were made. But a whole lot of learning also happened as a result of those mistakes. Sophomore Ian Kelly worked with the teams as project engineer, helping with error checking and formatting in AutoCAD.

In early March, Dr. Landon presented digital files of completed student floor plan drawings of the Welshimer and Seminary Library buildings to Gary Daught. “Wow!,” exclaimed Daught. “These drawings are great, and exactly what I was after. The students did an excellent job! I am really pleased to have had this opportunity to collaborate with the Engineering Department on this project.” Engineering Director, Dr. Greg Harrell indicated that this is exactly the kind of project that engineering students can expect to perform on a first job site internship. So it was a very relevant experience for the students. He also confirmed that they did a good job.

Daught wanted to express appreciation on behalf of Milligan Libraries to the Engineering Fundamentals students. So he invited Drs. Landon Holbrook and Greg Harrell, and several of the project team leaders to the Welshimer Library on Wednesday afternoon. There he presented the students with a new laser measure tool. “I know you use these tools in your coursework because I saw you in here several times over the semester with them to measure the Library. I want to present this laser measure to the Engineering Department as a small way to say Thank you! for a job well done on this project!” Daught also invited subsequent FENG 102 students to use the Library buildings to complete this project assignment in the future. 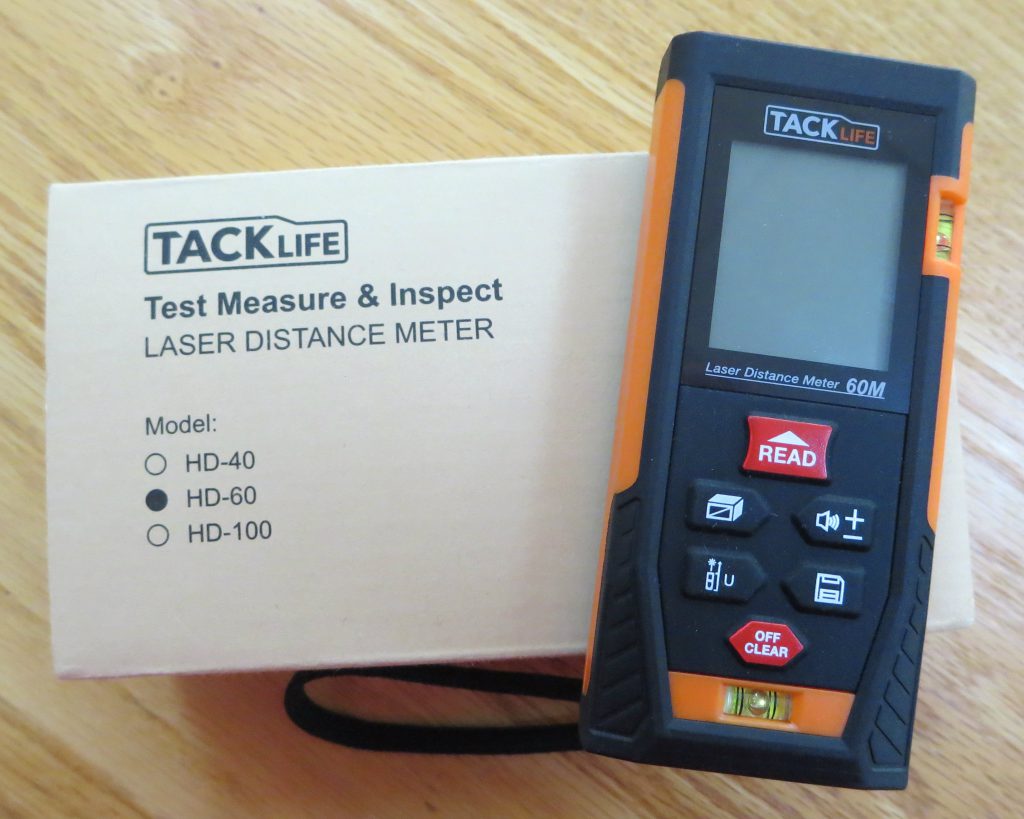