This Archives exhibit in the Library highlights a few of the near-100 student organizations on campus through the years, as well as a handful of the traditions Milligan students have enjoyed and still continue to enjoy, such as TWIRP Week and Wonderful Wednesday. Located on the first floor, the exhibit includes the orange and black beanies known as “dinks” that Milligan freshman used to wear and the “M” Club roster from the late 1940s that lists Milligan celebrity Coach Walker’s name. 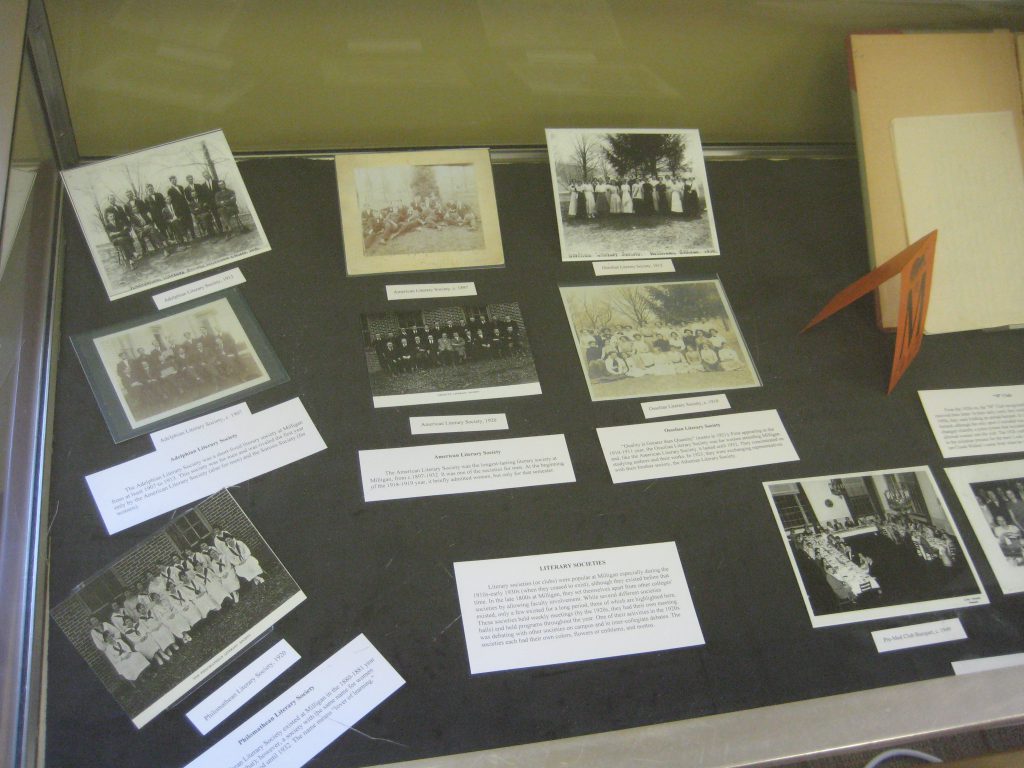 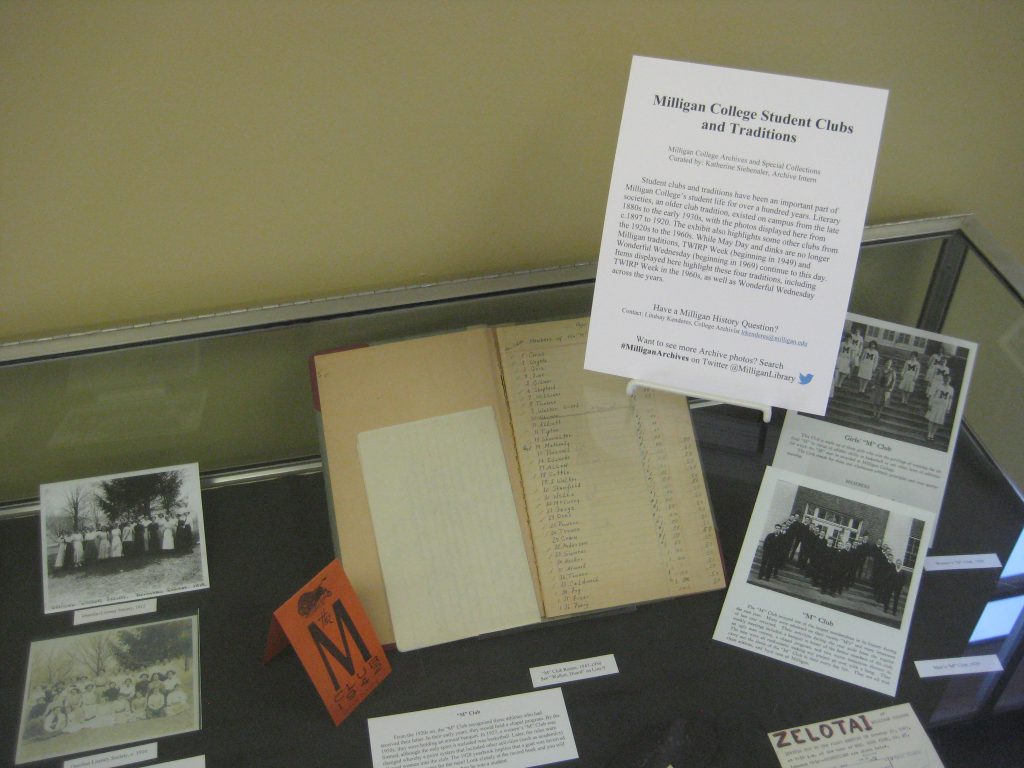 Included in the display on student clubs are the literary societies. Literary societies (or clubs) dated from at least the late 1800s to the early 1930s at Milligan. In the late 1800s, the societies at Milligan set themselves apart from other college societies by allowing faculty involvement. While several different societies existed, the exhibit highlights three longer-lived societies and one other society. These clubs would hold weekly meetings, occasional programs, and annual debates. The exhibit also covers the “M” Club, a club for athletes who had lettered in a sport. Begun in the 1920s, it first only existed for men until an “M” Club was formed for women in 1927. Two other clubs are also covered in the exhibit, the Pre-Med Club and the Zelotai Club. The Pre-Med Club lasted from 1937-1969 and included both men and women, helping them to learn more about their chosen field in medicine. The Zelotai Club was for wives of future ministers at Milligan, existing from 1955-1966.

Another display case contains items from four Milligan traditions: May Day, dinks (also called “beanies”), TWIRP Week, and Wonderful Wednesday. Milligan celebrated May Day from the 1930s to the late 1960s by crowning a King and Queen and holding a pageant. The exhibit includes May Day programs and photos from the celebrations. From the 1930s to the late 1980s or early 1990s, dinks were small hats that Milligan freshman were required to wear. Freshman had to beware the upperclassmen attempting to steal them, because if you got caught without your dink then you had to go to “kangaroo court.”

Standing for “The Woman Is Required to Pay,” TWIRP Week dates back to 1949 and still continues to this day, although not with quite so many rules. In the early days, the women were required to have a date and do everything a gentleman would do for a lady on a date during the early years of this tradition. If anyone was caught breaking the rules, they had to go to “Daily Court” after supper! The exhibit contains some items from TWIRP Weeks in the 1960s (including a picture that may be a couple at the Daily Court!). 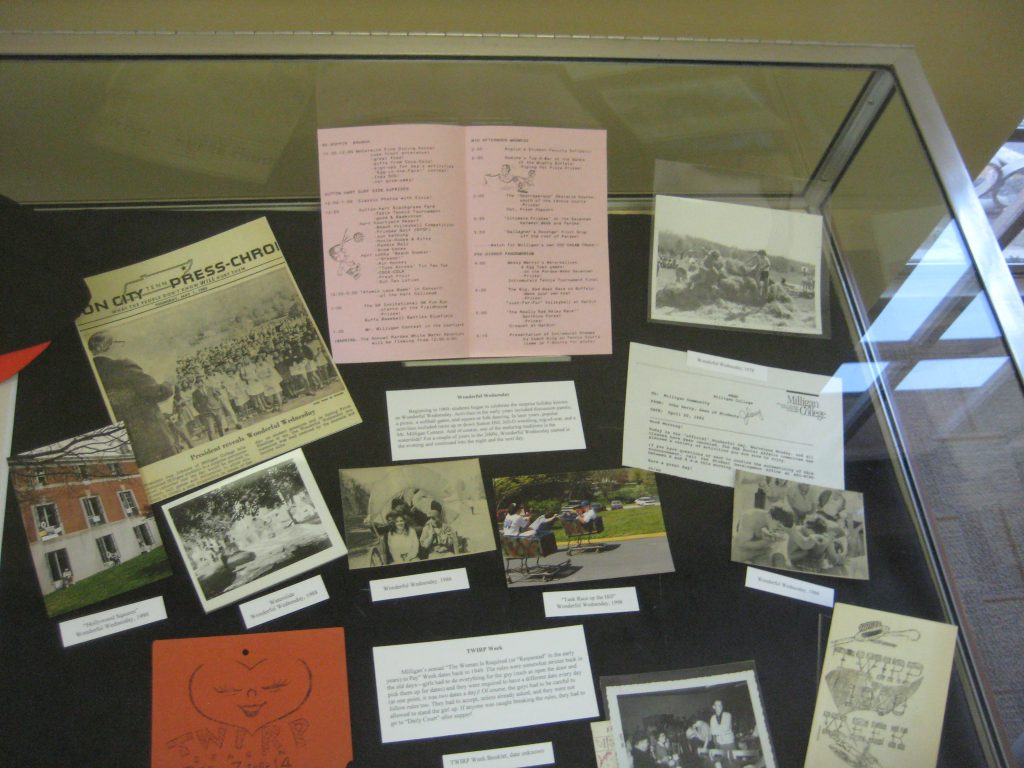 Lastly, the exhibit highlights photos and items from Wonderful Wednesday throughout the years, probably one of Milligan students’ favorite traditions. Beginning in 1969, the surprise holiday has taken many interesting forms over the years. Activities in the early years included discussion panels, a picnic, a softball game, and square or folk dancing. In later years, popular activities included races up or down Sutton Hill, Jell-O wrestling, tug-of-war, and a Mr. Milligan contest. And of course, one of the enduring traditions is the waterslide! The exhibit includes items and photos from the first Wonderful Wednesday through Wonderful Wednesday in the 1990s.

Have a Milligan history question? Contact Lindsay Kenderes, College Archivist at lrkenderes@milligan.edu or 423-461-8901 to access the Milligan College Archives and Special Collections.