The Holloway Archives at Milligan University has recently installed a new exhibit for Fall 2020 in the Welshimer Library. “Faces of the First Ladies: A Photo Exhibit of Milligan’s First Ladies, 1882-1968” displays over two dozen photos of Milligan’s presidential wives, from Sarah LaRue Hopwood to Dorothy Keister Walker. Included in the exhibit are short descriptions of these women, including how long they served as first ladies and who their husbands — the presidents — were. 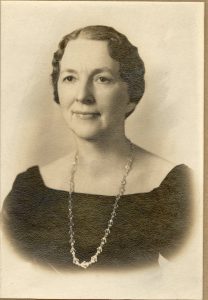 “The presidents get a lot of the spotlight in Milligan history, but the ladies have an interesting history too,” says Katherine Banks, University Archivist. “Sarah LaRue Hopwood was just as much a part of Milligan’s founding and early years as Josephus was. Perlea Derthick ran the school while Henry was away, which was often. Dorothy Keister Walker was an ordained minister and evangelist in the 1950s and 1960s.” 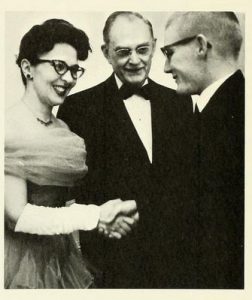 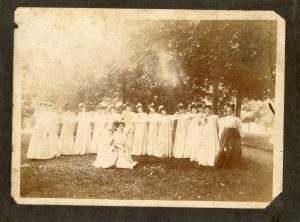 May Day Play, Olive Garrett on far right, circa 1896

While many of the photos in the exhibit are portraits of the women, Banks points out that several of them speak to the women’s involvement in the school as well. “Some of the only photos I could find for the early first ladies were of them with a group of faculty or with students,” Banks says.

Additionally, there are some photos of the women that show their personal side. “One of my favorite photos in this exhibit is of Sarah LaRue Hopwood with a parrot on her shoulder! Typically, you think of photos from the late 1800s and early 1900s as being stiff and unsmiling. But this photo breaks that stereotype and speaks to Sarah’s love of animals.” 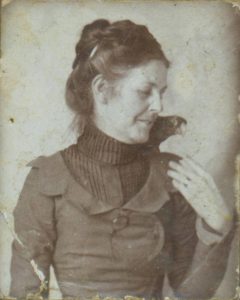 “We’re in a unique position this fall, with the pandemic, which may limit who will be able to see any archival exhibits,” Banks says. “I thought doing an exhibit that was heavily visual would be helpful for having an online version of the exhibit, so that people viewing the exhibit online wouldn’t feel like they were missing anything.” The exhibit is available for online viewing on Milligan DigitalRepository, Milligan’s online archival repository. Although slightly different in format than the physical exhibit, viewers can still see all the same information and photos that they would see in person. For those able to see the exhibit in person, it is available for viewing on the main floor (first floor) of Welshimer Library in the archival exhibit cases.