Two new exhibits are now on display at the Milligan Libraries. The Holloway Archives at Milligan University has installed a new exhibit for Fall 2022, titled “Founder’s Daughter: History of a Milligan Award, 1951-2000.” This exhibit traces the history of the annual honor given to a female student who was “the embodiment of the ideals upon which the college was founded,” according to Clint Holloway and Lee (Fierbaugh) Harrison’s book Scholarship, Community, Faith: Milligan Celebrates 150 Years. Tied to the annual Founder’s Day/Alumni Weekend/homecoming activities, the award originally had a pageant-like atmosphere. By its final years, it was more an award that was presented to the winning student.

“For an exhibit this fall, I decided that I wanted to focus on the history of Homecoming,” says Katie Banks, archivist at Milligan University. “But as I was digging in to the materials, I realized that I could do an exhibit on the Founder’s Daughter award alone. Even still, I wasn’t able to include everything I originally wanted to.” The exhibit contains several photos, yearbooks, and programs from the various years the award was being given. “I think it’s interesting to look at the materials presented in the exhibit and see the shifting nature of what it meant to be a Founder’s Daughter, especially if you compare them to the wider social norms of the time.” 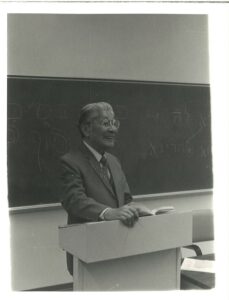 The exhibit can be viewed in person on the first floor of the Welshimer Library or online at Milligan DigitalRepository.

In addition to the exhibit at the Welshimer Library on the history of the Founder’s Daughter award is an exhibit at the Seminary Library on Dr. Toyozo Nakarai. “Toyozo Nakarai: Old Testament Scholar, 1898-1984” is a small exhibit highlighting items from the Helsabeck Archives of the Stone-Campbell Movement related to Emmanuel professor Toyozo Nakarai. Including photos of Nakarai teaching and studying as well as original manuscripts of a couple of his prayers, the exhibit highlights one of the founding members of the Emmanuel Christian Seminary faculty.

“Nakarai has such a fascinating story,” says Banks on this exhibit. “He originally grew up in Japan and was trained to be a Samurai. Due to an encounter with American missionaries, he converted from Buddhism to Christianity and became a respected scholar in Hebrew and Old Testament studies.”

The exhibit on Dr. Nakarai can be found just inside the entrance to the Seminary Library. Nakarai’s papers have also been processed and are available for viewing through the Helsabeck Archives.