Emmanuel Christian Seminary became part of Milligan College on July 1, 2015. Since that time, Milligan Libraries has existed as one library in two locations — the Welshimer Library at the center of campus, and the Seminary Library in west wing of the B.D. Phillips Building on Emmanuel Hill. 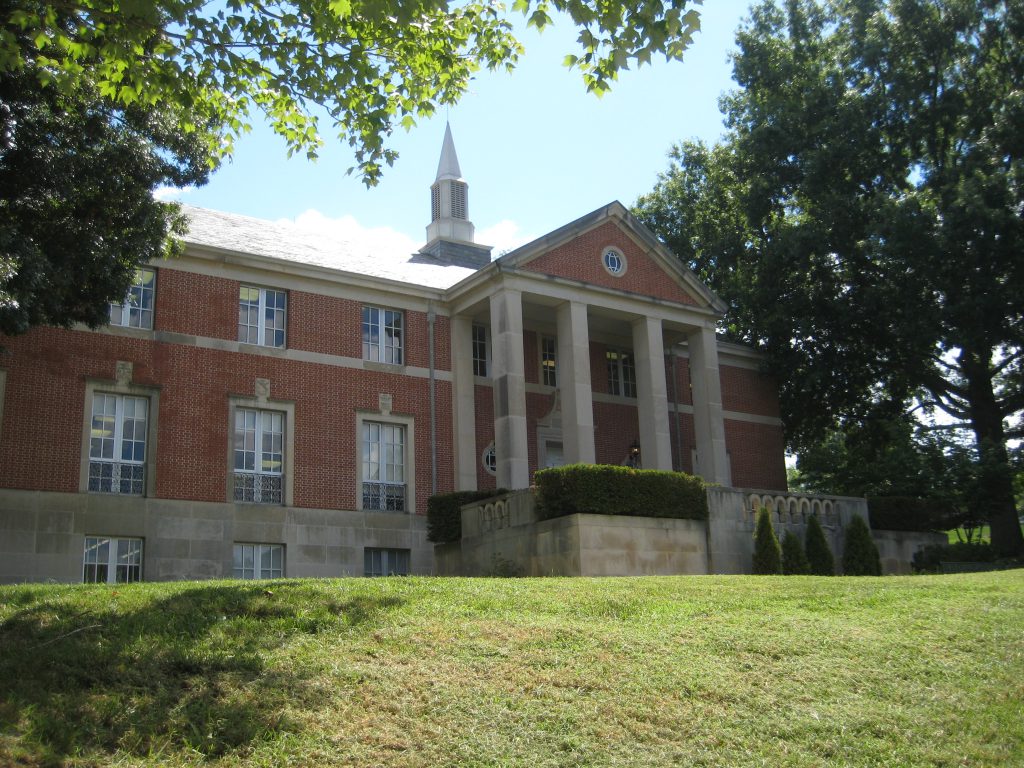 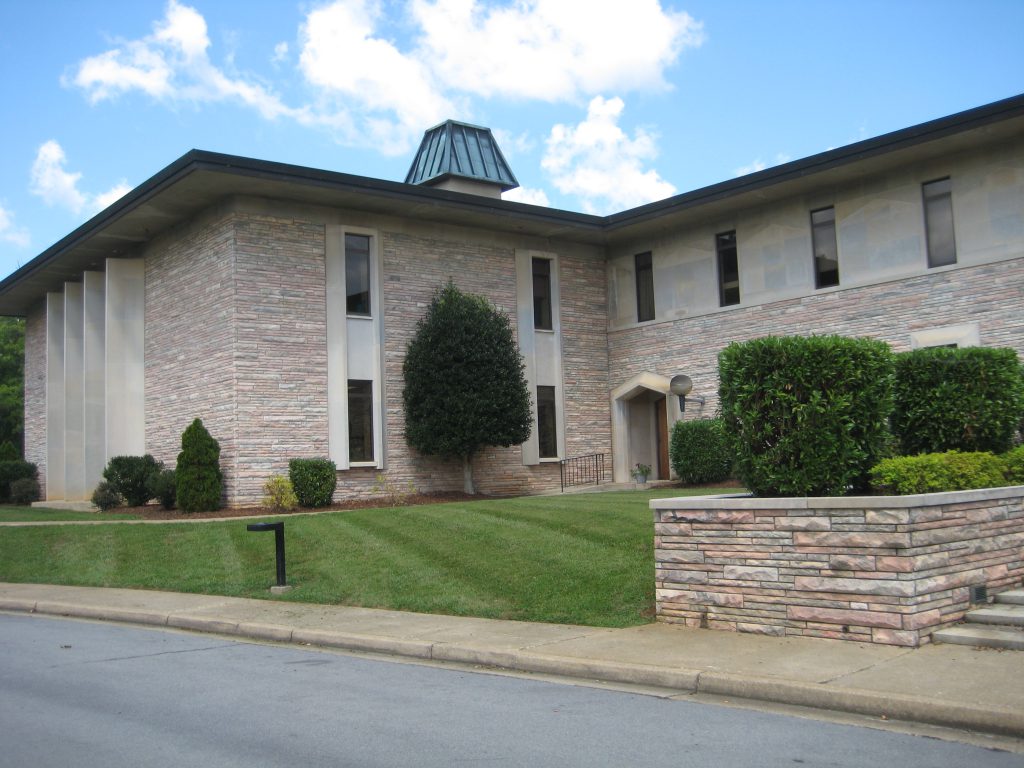 As locations for physical book and media collections, Welshimer Library houses the bulk of resources to support the College’s undergraduate and professional graduate degree programs, while the Seminary Library primarily houses a theological collection supporting the Seminary’s graduate programs (and the undergraduate Bible and Ministry program). This collections perspective might seem to guide students and faculty in their choice of a “home” library location. But these days libraries are more than collections. Milligan Libraries also strongly promotes a spaces and services perspective in which either library location is a welcoming “home” for all Milligan students and faculty to use for study and learning. This has become especially true at the Seminary Library, where in addition to the Seminary, the B.D. Phillips Building hosts the undergraduate Engineering program, and the graduate Occupational Therapy and Physician Assistant programs.

Like most libraries, Milligan Libraries tracks space usage at its two locations. But instead of counting people as they enter the library (called a gate count) we developed a metric called the hour-visit. The hour-visit is a headcount of every person in the library each hour that it is open during the day. The advantage of this way of counting is that it enables us to track not only when, but also where (which floor) and for how long the library is used with each visit. For example, when a student enters the library, a gate count would log 1 visit at entry. But that student may be in the library studying for 3 hours. The headcount approach would log 3 hour-visits for this student. Additionally, when correlated with Milligan College enrollment headcounts, we can track average per student usage of the Library over the course of the semester.

Fall Semester 2019 concluded with Commencement Service on Friday evening, December 13. Earlier in the day we collated the library usage statistics for the semester, discovering we had set several new records. 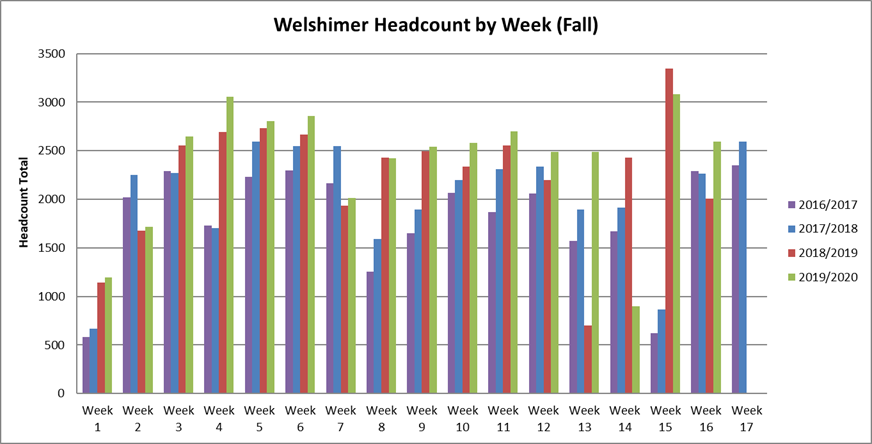 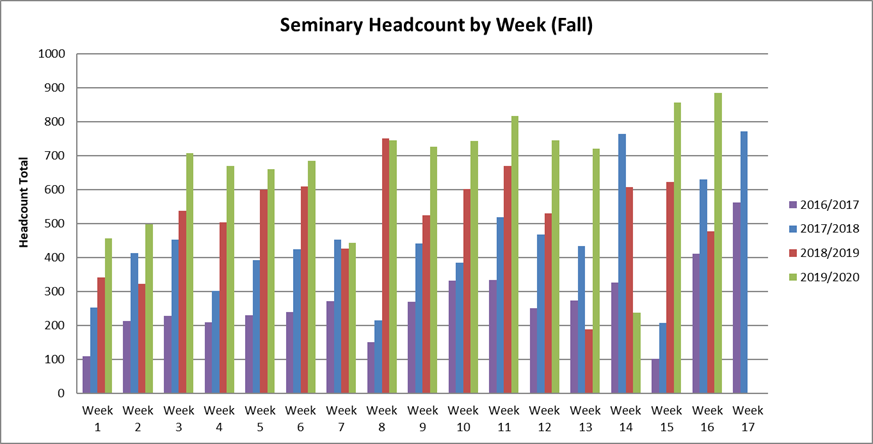 Milligan Libraries’ combined usage for Fall 2019 was 48,669 hour-visits. When correlated with Fall 2019 College enrollment headcount of 1,335, this works out to a per student library use of 36.5 hours over the course of the semester. Also a new record.

For some historical perspective, Fall 2016 was the first full semester after Emmanuel Christian Seminary became a part of Milligan College. This was also the first semester we began tracking usage at the Seminary Library. In Fall 2016, Welshimer Library had 30,716 hour-visits and the Seminary Library had 4,518 hour-visits, for a Milligan Libraries total of 35,234 hour-visits. Milligan College enrollment headcounts in Fall 2016 was 1,213, which worked out to a per student library use of 29.0 hours. Compared to four years ago, Milligan Libraries’ combined hourly usage has increased 38.1%, and the per student semester usage has increased 25.9%!

These statistics suggest Milligan Libraries is providing spaces conducive to study for the Milligan College learning community. We are pleased to be of service! 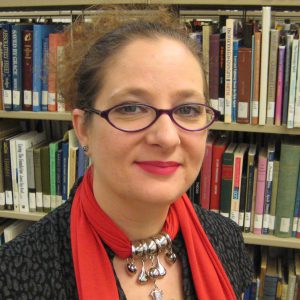 Please join us in welcoming Jude Morrissey to the Milligan Libraries staff. Jude is the new User Services Librarian at the P.H. Welshimer Memorial Library, taking over from Anne Reever Osborne, who relocated with her family to Nashville.

Jude received her BA in Religion and Philosophy from Berea College (2005), and her Masters of Library and Information Science from Louisiana State University (2012). Jude comes to us from New Orleans, LA, where she worked most recently as Circulation Supervisor for the Jefferson Parish Library. She first came to the New Orleans area with her husband (Michael) and two children (Madeline and Isaiah), as a recipient of an Institute of Museum and Library Services grant to participate as an intern at various library sites with Project Recovery (2010-12). From 2008-2010 Jude and her family lived in Thailand working as English language teachers.

As User Services Librarian, Jude oversees the circulation of library materials and everything related to you as a library patron and user—from making sure you can check out items to keeping you updated about library news and events on our blog, Twitter feed, or Facebook page. Jude also processes your interlibrary loan requests and supervises our student workers.

On February 1, 2016 the annual February Madness Library Pen Tournament commenced once again. Now in its 5th year, the tournament draws participation and engagement from across the Milligan College community. Participants compete in a friendly 32 player single elimination bracket competition via Milligan Library’s social media accounts. The color scheme that wins the championship round of  February Madness becomes the library promotional pen in the next academic year. 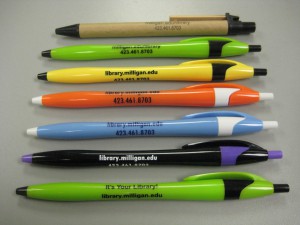 In the past, the pen color was chosen by library staff and  then distributed throughout the year during library orientations and other campus events. The first pen distributed in 2009 was eco-friendly with a cardboard barrel and a wooden pocket clip. Unfortunately, it proved unable to hold up to the rigors of academic use and was discontinued in  favor of a more durable, brightly colored, plastic model in subsequent years. In 2011 ideas were exchanged on ways to engage students and the Milligan community to connect via the library’s new Twitter and Facebook accounts. Jeff Harbin, User Services Librarian at the time, came up with the idea of having a tournament that would mimic the NCAA March Madness basketball tournament but would occur toward the beginning of the spring semester and involve choosing the annual library pen color from 32 various color combinations. Anyone who wanted to participate in February Madness would “like” the Milligan College Library Facebook page and “vote” for their favorites during a 2 week period in early February. New pens arrive in March. The tagline “It’s Your Library!” was added along with the library’s website address in 2015.

This year, after much campaigning and record breaking voting that increased the library’s following on Facebook to well over 550, the 2016-17 pen is Burgundy/Silver. The new pens have arrived and are in distribution at both the  P.H. Welshimer Library and the Seminary Library. 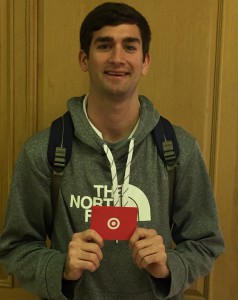 ho participated in the tournament were entered to win a Target or Dunkin’ Donuts gift cards. The lucky recipients this year were Mitchell Hancock, Shae Judge, and Jackson Lenoir (pictured). Congratulations!

Thanks to the Milligan community of faculty, staff, students, alumni, and friends for making this a fun way to get through the February snow and cold.

Change Note (01.25.2016): I originally reported that we had set the initial search to limit results to “Milligan College Libraries.” We discovered that this impedes catalog functionality when our website search widget is used. Consequently, we have changed the default search to “Libraries Worldwide.” As I indicate below, even when “Libraries Worldwide” is selected any relevant holdings in the Milligan College Libraries will rise to the top of your search results. You can also apply the Welshimer and/or Seminary Library limiter in the left-hand column to refine your search results to show only local holdings.

In a process that formally began back in May 2015, the book, media, and periodicals holdings of the Emmanuel Christian Seminary Library have now been added to the P.H. Welshimer Memorial Library’s online catalog. (The Welshimer Library migrated to the WorldCat catalog platform on September 2, 2014.) As of today, January 13, 2016, the Milligan College Libraries “goes live” with a combined online library catalog!

Our catalog is operating within the WorldCat Discovery Services platform. You can easily access the catalog from the Milligan College Libraries website. On the homepage click/tap the “Catalog” tab in the MCSearch widget. (Alternatively, you can click/tap on the “Catalog” dropdown menu and select “Milligan & Libraries Worldwide”.)

Research & Instruction Librarian Mary Jackson has created a live demo tutorial introducing some of the basic features of the catalog, so I won’t go into detail here except to highlight a few things: 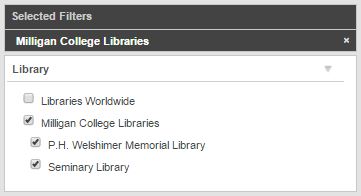 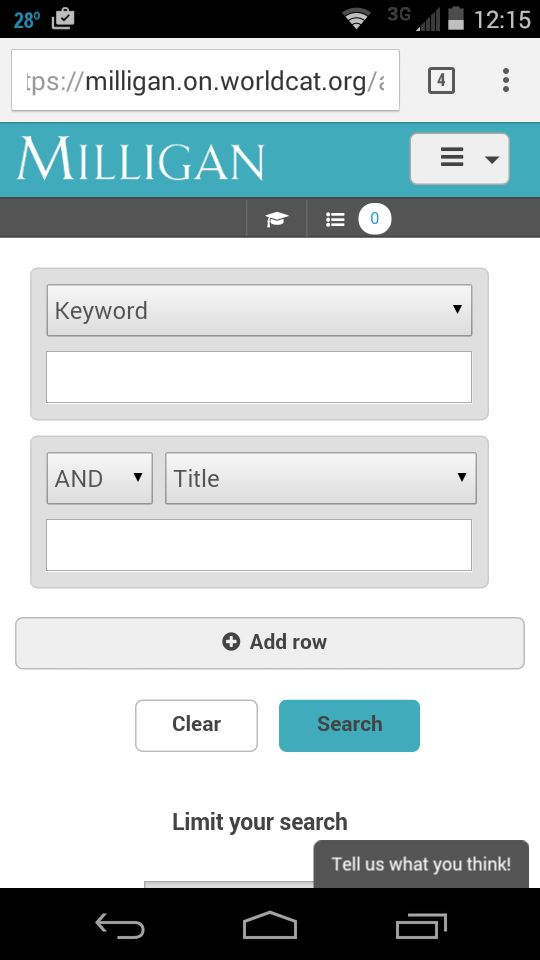 We hope you will enjoy using the combined Milligan College Libraries online catalog. Please feel free to consult any library staff person for assistance with specific issues or questions. 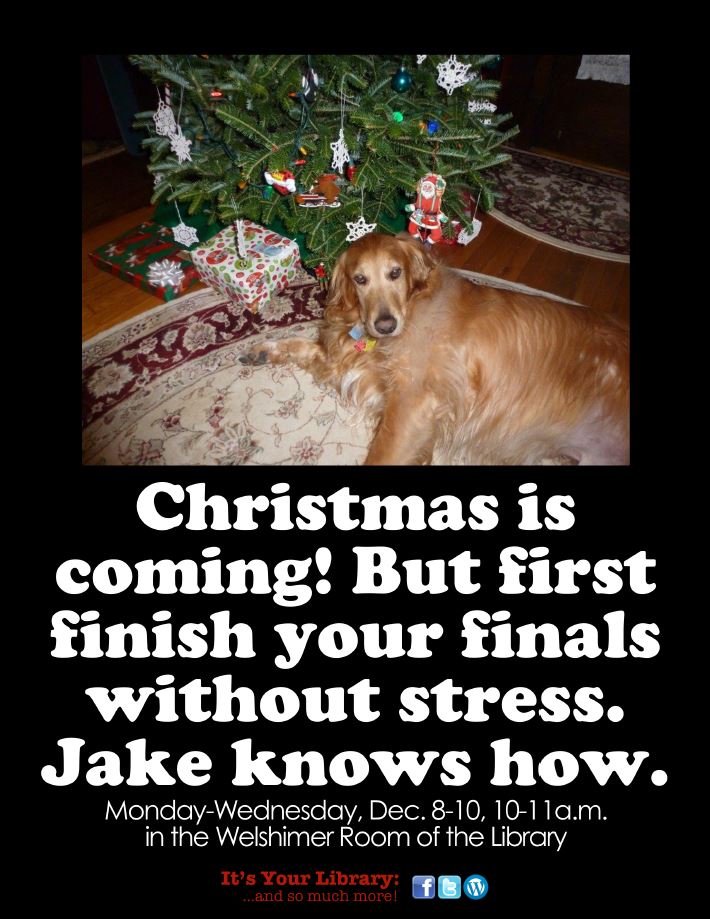 Jake the Therapy Dog, along with Dr. Julia Wade, his owner/trainer will be returning this year to visit students Monday-Wednesday of Finals Week at the Library. Meet Jake and Dr. Wade in the Welshimer Room from 10-11 a.m.